When it comes to gender equality, Denmark still has a long way to go

For IDA-members, sexism often has to do with a lack of professional recognition at the workplace, says equality researcher Sara Louise Muhr. To change the culture, we need to recognise that we all have prejudices, and that even in Denmark, we are perhaps not as equal as we like to think. 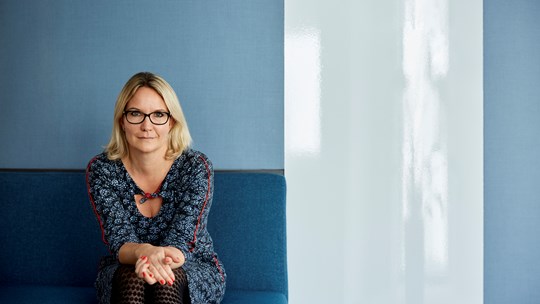 Sara Louise Muhr is a professor and researcher of equality at Copenhagen Business School (CBS).

In the current MeToo movement, the most sensational cases tend to dominate the headlines.

The focus is on physically offenses and serious harassment, as in the very discussed cases concerning former Lord Mayor of Copenhagen Frank Jensen and P1 radio host Mads Aagaard Danielsen.

But for most people, sexism is more difficult to define. To them it represents a daily working life with condescending remarks, inappropriate jokes, or a lack of professional recognition, explains Sara Louise Muhr, who is a professor and researcher of equality at Copenhagen Business School.

She links the many recent cases to a culture where unconscious biases about what men and women can are far more widespread than actual cases of assault.

“Sexism is not just about a flock of sex-obsessed leaders. It spans from condescending remarks based on gender and all the way to physical assaults”.

Sexism is not just about sex

Sexism means biases or discrimination based on gender.

The term was introduced by feminist researchers in the 1960s as a parallel to the term racism and is particularly used to express the negative assessment of women.

“It is also sexism when women in STEM (i.e. the fields of Science, Technology, Engineering, Math) are constantly told that they are less skilled at maths or do not fit in. We are all part of a system in which leadership and scientific thinking are thought of as masculine qualities, and this affects the expectations that female engineers, for example, are met with”, Sara Louise Muhr explains.

This is to a wide extent the case at technical and scientific research institutions, where female researchers experience that their knowledge within their fields is questioned, Sara Louse Muhr says.

“Two years ago, a male professor told me that it is obvious why we have so few female researchers: it is scientifically proven that men are smarter than women”.

“We also have many examples from teaching situations where women have been told that they do not possess the same abilities as men. I remember an example from a female PhD student in a STEM course who completed an assignment and received the comment; ‘God, it’s good. Did you get help from someone?”.

Sara Louise Muhr explains that women who complain about the tone at their workplace are often dismissed with the claim that they lack humour or told that they need to toughen up and not expect special treatment.

But according to her, the problem is that women at male-dominated workplaces often find themselves on different terms – and the same goes for men who depart from the norms of the workplace.

“I have just spoken to a colleague who started reading his girlfriend’s emails. He says it is incredible, because he never experiences the same tone. It may not be an expression of an intended cruel exercise of power, but when you are constantly subjected to condescending emails, jokes or comments at lunch, it leaves marks”.

We are all biased

Before the interview with Sara Louise Muhr, I took a Harvard Implicit Association Test – a test which supposedly reveals our unconscious biases – for example when it comes to differences between the genders.

In the test I have a tendency to connect masculine terms, such as “grandfather” or “gentleman” with scientific fields and feminine terms, like “daughter” and “aunt” with humanistic fields. Hence, I have a “strong association between men and natural sciences and women and humanities”.

When I tell Sara Louise Muhr that, she laughs.

“I would be surprised if you had gotten any other result. I also unconsciously associate men with natural sciences, and I automatically become surprised if I ask for help from the IT support and a young woman shows up”.

We all have those biases or expectations. And we are dependent on them if we don’t want our brains to crash every time we face a new situation or have to make a decision. It is a shortcut to processing impressions”.

According to Sara Louise Muhr, the problem arises when unconscious – and untrue – biases become self-perpetuating in the real world.

“If you look at Danish girls under the age of 14, they are among the best in the world in STEM-subjects. But their interest gradually disappears, until they are around 14, and that has to do with the internalisation of the idea that STEM is not for them. This is a huge problem for our society and businesses, as these are already short of qualified labour.

Be careful with initiatives for women

Sara Louise Muhr wonders why major engineering firms in Denmark do not prioritise working with primary and lower-secondary schools more. Not just to increase the number of women in STEM, but also because it is “amazing branding”.

She is, however critical of special initiatives aimed at attracting more female leaders or researchers.

“I have a list of the most common mistakes, and one of the points is initiatives for women, because these often take an approach of helping and qualifying women in order to make them able to compete at an equal level with men. But we need to move away from these claims that women cannot or do not want the same as men”.

Such well-meaning initiatives show that even people who agree that equality is important are not free from carrying unconscious biases. In a work situation, the best solution might be to recognise one’s own biases, and attempt to avoid being influenced by them when making decisions.

“It is a misunderstanding that you can never tell a sexual joke or flirt with a co-worker – of course you can. You just cannot do so with your employees”

“You need to recognise that it is impossible to be neutral. That is why I always asks businesses why they include name and photo in the first screening when hiring new employees. It is completely unnecessary, and we know it causes bias”.

Zero-tolerance is not productive

The biggest opponents of the MeToo-movement accuse it of being a witch hunt or the product of radical feminism. They fear that we end up living in a Puritan and humourless society where men and women cannot interact in a natural way at work. However, Sara Louise Muhr does not accept that premise.

“It is a misunderstanding that you can never tell a sexual joke or flirt with a co-worker – of course you can. You just cannot do so with your employees”

When it comes to relations between colleagues, the rules are less rigid, and Sara Louise Muhr actually finds the expression “zero tolerance” problematic.

“We obviously have a zero-tolerance if someone is raped at the office, or if an employee consequently harasses others at the annual Christmas parties. But 90 per cent of cases involve grey areas where you cannot point to one incident and say it clearly crossed the line. These grey areas are something we need to discuss in order to change the culture”.

Every organisation should work with developing its culture – not just when it comes to sexism, but also the general tone of communication – on several levels.

It is the responsibility of the top management to lay out what is allowed in an organisation. Middle managers must handle communication from employees, and all employees must pay attention to their own behaviour towards colleagues – and make a collective objection when something has crossed the line.

This brings us back to Sara Louise Muhrs initial point that the main cause of workplace sexism is not the individual offenders, but the majority who indirectly accept a damaging culture.

“What is interesting is the large, quiet majority who do not speak up. I get many messages from victims of sexual harassment who were unable to react due to shock. It is not until afterwards that they are able to reflect and wish that they had acted differently”.