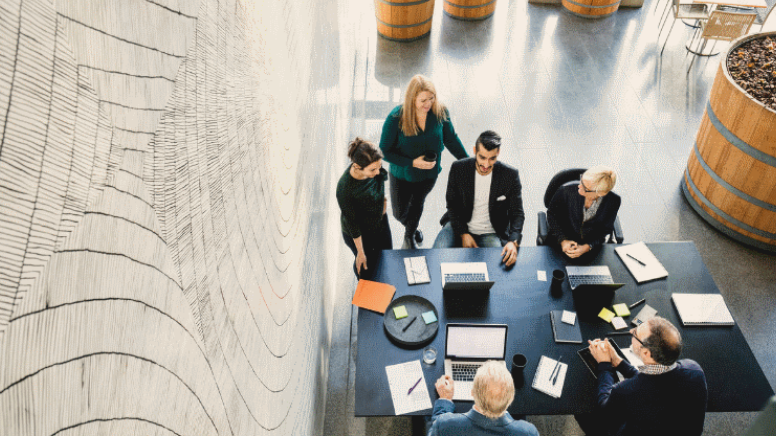 Danish working culture is characterised by open and informal dialogue between employees and management. Teamwork plays an important role in many workplaces, and mutual respect and trust are key terms. The hierarchy can seem flat and informal, and it can often be difficult to distinguish managers from employees when looking around in the organisation.

Danes are highly group-oriented and it is normal to discuss subjects in order to reach an agreement. It is not common – as it is in the US and the UK – to resolve matters by vote. Rather, people discuss in order to achieve consensus and to see matters from all possible perspectives.

Asking ones colleagues for advice is not seen as a sign of weakness. The ability to cooperate is regarded highly, and people help each other across status and professional categories.

Danish workplaces are typically characterized by an absence of the highly hierarchical structure found in many other countries.

The line of command between the manager and the employees is short, and in principle everyone – regardless of education, position or social status – is regarded as equal.

It is thus only natural to find the manager spending the lunchtime with the staff and standing in the same queue in the canteen.

The manager also listens to his or her staff and is willing to take advice because the staff is seen as specialists in their own fields. The high degree of individual responsibility and trust is deeply valued by employees - often higher than, for instance, salary and employment security.

At work, many Danish professionals keep an ironic distance to themselves and remain modest in social interaction at the office. You will rarely hear someone promote themselves or their own skills. On the contrary, people tend to underplay their own role and qualifications.

Work discussions are often carried out in a rather direct fashion, but it is possible to have fun together immediately afterwards. Criticism is regarded as something that has to do with one’s work and not as a personal attack.

Compared to other countries, Danish workplaces often have an informal tone among colleagues. Many Danes voice their opinion in many situations, including sharing which political party they vote for or what they think of a certain public figure.

Social life at work is usually concentrated around the lunch break.

Many Danes give high priority to family life, leisure activities and friends and thus go straight home after work. However, many workplaces have a tradition of meeting with colleagues on Fridays after work to have a beer.

The social climax of the year is typically the Christmas lunch in December, and many workplaces also have a party or another social event during summer.

Peer Group for foreigners in Denmark

As a member of IDA, you have access to our peer group for foreigners working in Denmark. The peer groups are organised around the country and are a good forum to discuss challenges and concerns with other international professionals who are new to the Danish job market.