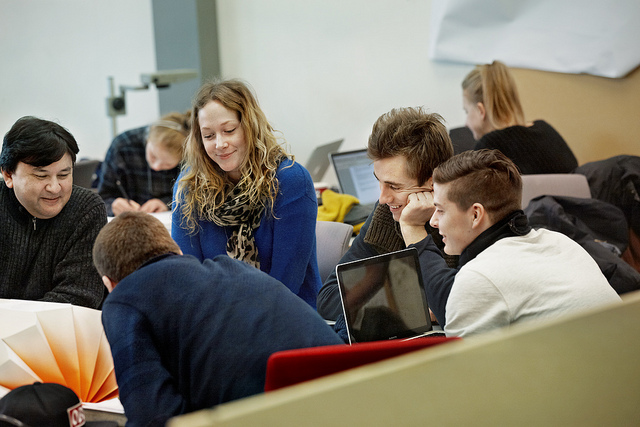 It can be difficult for foreign engineers to pick up Danish when the corporate language is English. Therefore, the Danish Society of Engineers, IDA, has set up a beginners course for its foreign members.

You would think that engineers would be good at numbers, but this is not always the case. At least not for the eight foreign IDA members who are participating in the ‘Learn Danish with IDA’ course.

However, it is not numbers as such they have problems with, but the way in which the Danish language refers to numbers. Why is it 'syv og tyve' (seven and twenty (27)) instead of 'tyve og syv' (twenty and seven)? That would be more logical. And why is halv-treds Danish for fifty when you would think it was half of tres (half of sixty)?

Making the course even more difficult, Danish teacher Tanja Ettin has asked the participants in pairs to give each other's telephone numbers.

Russian Dima Obukhov and Spanish Daniel Hermosilla are extremely focused on the task and eventually come up with the eight figures that are typical for Danish telephone numbers. When Dima points at the figures he has listed as Daniel's telephone number, a loud and clear 'no' in almost perfect Danish sounds before they both laugh out loud.

For some reason, it says 43 where it should have said 83.

The course participants gathered in a conference room on the 2nd floor in the IDA building in Copenhagen have never taken Danish lessons before, and this Tuesday evening is only their third lesson. Given this, they have picked up many Danish words in a very short time.

Thirty-one-year-old Dima Obukhov, who has a Master's in software engineering from Moscow, has been working in Denmark for two years and already feels that he has learned a lot from the course, even though the numbers are still tricky:

“The most difficult thing is the pronunciation. I was so surprised that 'Amar' is spelled Amager. Danish is pronounced correctly, but is spelled wrongly," he laughed, and added:

“Before I started on the course, I understood nothing, but I can already understand small fragments,” he said in fluent English.

“The course for foreign members is part of an attempt to attract and retain talent in Denmark,” explained Sara Berthou, a Master of Science in Anthropology and a growth consultant at IDA.
“We can see that language plays an important role in retaining people in Denmark, because knowing the language is crucial for well-being. We also see that Danish language skills are the trigger behind some foreigners leaving Danish jobs.”

Today, English is the corporate language in many businesses. So why offer a Danish course to foreign IDA members? First and foremost because Danish-speaking colleagues often switch to their native language in social contexts – even in large international businesses where English is always spoken and written in a work context:

“For the individual, language plays a role for well-being, because many social events are in Danish. It makes a huge difference that they can take part in the conversation, because otherwise they might not be included in a social network that is so important for not feeling isolated,” explained Sara Berthou.

The purpose of the course is also to give participants an insight into Danish culture and help them create a network.

“In some areas, Danish work culture differs significantly from the culture in other countries. Simple things can make a huge difference in everyday life, for example the perception of hierarchy and how to interact with managers and colleagues,” she said.

Easier to get friends

Spanish Daniel Hermosilla, 27, is doing a Master's in wind energy at the Technical University of Denmark (DTU) and has been in Denmark for two years. At DTU, he does not need to be able to speak Danish, as most teaching is in English, and the majority of his fellow students come from outside Denmark.

“More than anything, I'm curious to get to know the language – also because I want to get Danish friends. It's difficult to socialise outside university, for example at a concert, if you only speak English,” he said.

Daniel Hermosilla expects to complete his degree on 22 June and could very well see himself staying in Denmark if he finds a job. This is also a good reason to learn the language.
“It would look good on my CV that I can speak Danish, even though English is my working language,” he said.

Difficult when everyone speaks English

One of the other course participants, Dima Obukhov, has lived in Denmark for two years, and works as a CTO in the startup Artland; an art communication portal. Here the working language is also English.

“I'm a little embarrassed that I don't speak the language of the country that I live in. Language is also a way of getting to know a country,” he explained.
With an active working life, it is positive that the course is only one evening a week:

“I'm very busy during the week, so it's difficult to find time for everything.”

According to Dima Obukhov, well-intentioned Danes who quickly switch to English can be a barrier to learning Danish:

“I try practising, but it's difficult when everyone speaks English.”

In addition to the two-and-a-half-hour teaching every Tuesday evening, the course participants can practise the difficult words online

“The course is organised so that it takes into consideration that the participants also have jobs or are studying. If you're prevented from showing up, you've got plenty of time to catch up online,” Sara Berthou said.

Hear more about the courses

Since this article was published, IDA has expanded the Danish Courses for internationals with several modules at different levels.

When sign up opens up for new modules, registration will be available through this link.

When sign up is not available, you can send an email to opo@ida.dk to show your interest in the next round, and we will get back to you when new modules begin.

This article was originally published on ing.dk

When sign up opens up for new modules, registration will be available through this link.

When sign up is not available, you can send an email to opo@ida.dk to show your interest in the next round, and we will get back to you when new modules begin.