According to the Dutch entrepreneur, Geke Rosier, who has created a platform to get more women into the IT sector, we need more women in tech. Not for the sake of diversity, but because this is the only way to fill all the vacancies.

Digital technologies are seeping into virtually everything and are improving productivity in almost every sector. However, a fundamental challenge is to attract talent to the technical fields, but things are moving too slowly, especially with regard to women.

Geke Rosier has worked in the IT sector for 25 years, and in the wake of the dot-com bubble in the 2000s, she worked with many large financial companies that had to upgrade their IT. Here, it became clear to her that it was more difficult than usual to recruit women to the IT departments.

Therefore, she began searching for research on the subject. She turned to people in the IT sector and to various organisations, and came to the conclusion that something had to be done. So she founded RightBrains - a platform to expand the range of digital talent and to attract more women to the field. This order of priority is vital, because one of Geke Rosier's most important points is that it is all about adding talent to the sector, then increased diversity and the associated benefits will come automatically. 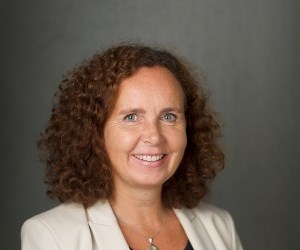 "I don't think that the debate should be about diversity. You need to ask the right questions to find the right solution, and I believe that the challenge is about much more than just diversity. It could be a question of: How we adapt our education programmes to a digital future? How we change our mind-set about digital technology? And how we create a management culture in which all employees feel included? Answering these questions will automatically lead to more diversity," said Geke Rosier.

She believes that the diversity concept creates negative associations, because it always ends up being about why so few women get to the top or whether we should introduce gender quotas.

Geke Rosier’s belief that it is so important to get more women into the tech sector is actually about something as simple as figures. At least to start with.

“It’s actually an economics issue. Because there's a considerable shortage of talent within digital technology," she said, and continued:

"And where can you find an untapped talent pool? I can see a huge potential for finding digital talent if we focus on women. Because there are still very few women who can see the opportunities in choosing a career within this field."

The fact that Geke Rosier chooses not to discuss diversity is also because it quickly turns into a discussion about what women can do compared with men, and thereby also what they cannot do, and this takes the discussion off track.

“It’s the wrong discussion, and it’s taken us nowhere."

Geke Rosier refers to research conducted throughout the world on stereotypes and women's abilities within natural science subjects.

"It's been shown that stereotypes about men and women are particularly strong in the Netherlands. Unconsciously, we say that women are not as good as men at STEM (Science, Technology, Engineering and Math)," she said.

But according to Geke Rosier they are, and there is a host of interesting career paths for women who are willing to give the IT sector a chance. Women can help make IT more rounded than IT made wholly by men.

Geke Rosier is reluctant to quantify how many women the tech sector needs. This can be calculated in so many ways and with large national differences. A Danish survey by the Danish ICT Industry Association (IT-Branchen) indicates that well below 25% of employees in the IT sector are women, and that the share of female students on IT study programmes is stable at around 27-28%.

Outside Denmark, hundreds of surveys show similar results. For example, a survey from 2017 showed that around 20% of Google's engineers were women. However, regardless of the method of calculation, the global IT sector is facing major problems in attracting women – and unfortunately also problems holding on to them.

Geke Rosier said that the Netherlands has managed to encourage more young women to choose science in upper secondary school. Yet, this has not been reflected in larger uptakes of women in technical programmes at universities. And what is worse: Women leave the tech sector quicker than men.

"Therefore we need to ensure that a sufficient number of women enter the sector and that we can retain them," she said and referred to surveys showing that a significantly higher number of women than men who have studied on a STEM programme and have found a job, leave the profession within their first year.

Everyone is fishing in the same pond

There are numerous analyses of why, since the mid-1980s, women have increasingly opted out of the IT sector, and the conclusions are many. Geke Rosier believes that more female role models and female leaders in tech companies will attract more women to the tech sector. However, she also emphasises that this in no way implies that a man cannot help create a “female-friendly" working environment where everyone is treated equally.

"This is not where you’re going to find more talent. Everyone’s fishing in the same pond, and this means that they don’t search on programmes with analytical competences or creative competences and then develop these recruits into experts. My advice is: Look in other places too!," she said.

She also believes that the educational system should be rethought if more women are to be attracted to tech programmes - especially if they are to stay. She questions the structure of upper secondary schools, where students very early on have to decide whether they want to pursue a mathematical/tech path or a linguistic path.

"This is ridiculous, because asking these young people to make such early choices does not promote what the market is asking for," she said.

Instead, digital competences should be given higher priority, and be integrated even more into all parts of teaching.

HEAR ABOUT GEKE ROSIER'S WORK ON GETTING MORE DUTCH WOMEN INTO THE TECH SECTOR - A COMBINATION OF INSPIRATION, EDUCATION AND NETWORKING.