Mikkel Schildknecht Hoé, mechanical engineer, reacted promptly when his girlfriend, who is a nurse, needed goggles. Only three weeks later, the production was running, something that normally takes six months. 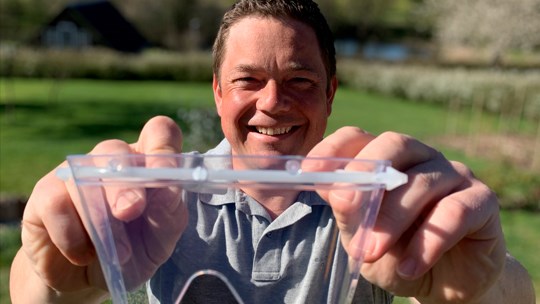 Mikkel Schildknecht Hoé usually makes sure that the production of Lego bricks runs as it should, but in the last 5 weeks, he has produced goggles.

"It was a damn good idea, start it up right away!"

This was the answer from Mikkel’s boss over a Skype Meeting when he presented his early thoughts on using some of Lego's production capacity to make goggles instead of Lego bricks.

A few hours earlier, he had been sitting at home on the couch with his girlfriend. She was on maternity leave and he furlough from work after Mette Frederiksen had shut Denmark down. She asked him if Lego had any goggles lying in the workshop they could donate. Her colleagues lacked emergency protective equipment to protect themselves from coronavirus.

However, a single pair of goggles here and there is not enough, especially if hospitals already lacked the means to protect more than 100,000 doctors and nurses. That is why Mikkel's head started to bubble with ideas on how to design eye protection that could be produced in the factory of Lego in Billund.

Time is the most important factor

But how on earth can machinery that normally manufactures colourful building blocks for children suddenly be modified to fabricate flimsy eye protection for healthcare workers?

"The most important thing was that we did something that could fit into what we already have. This means that it could fit into our casting and moulding machines. After all, we would not be able to move quickly if, for instance, we had to go out and buy new moulds or technology. The whole idea was that we had to do it the same way we fabricate Lego bricks," says Mikkel Schildknecht Hoé, mechanical engineer and Lego Senior Equipment Manager.

When I showed it to my sweet girlfriend, she just looked at me, put the glasses on and said, 'this is a complete failure'

Fortunately, Lego's production is highly standardized, explains Mikkel Schildknecht Hoé. This means that you can quickly take a moulding box off-the-shelf and manufacture something else.

Within the first week, Mikkel and the rapidly growing team around him had developed the first prototype, which was 3D printed and sent out to the inner circle by taxi, since the lockdown prevented them from meeting in Billund. Luckily, he had a qualified professional close to him.

When I showed it to my sweet girlfriend, she just looked at me, put her glasses on and said, 'this is a complete failure', remembers Mikkel Schildnecht Hoé, laughing.

After a mishmash of email threads, drawing programs and skype meetings, the next week was spent adjusting the visor, adapting moulding boxes and getting the machines ready for the new product.

"We've done it all online. All those things, like drawing it up and calculating, were done from home. Then I had a few people out in Billund and a few subcontractors that met the requirements to be part of this project. The rest was nothing but facetiming. I haven’t been in the factory at all," he says.

The result of all this effort was ready shortly after the prototype. In three weeks, Mikkel and his team of up to 100 people have done something that would normally take six months: they got production up and running that manufactures 18,000 goggles a day.
"It feels great," says the 39-year-old mechanical engineer with pride and relief in his voice. 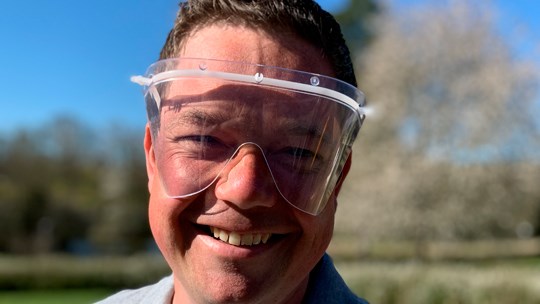 Mikkel Schildknecht Hoé and his staff have been praised by the regions for the simple design of the goggles.

"I've been thinking about it a lot, it's kind of like if you perform first aid – knowledge compels. If you have something that can make a difference right now, then you should do something about it, if we, Lego, could help to cover a need, then we should do it," says Mikkel, who has also been pleased with Lego's response to his idea.

Cooperation has never been better

Today, Mikkel relaxes at home in Rårup, a small village outside Horsens. He takes his four-month-old daughter for a walk in a pram, who he has missed quite a bit in the past five weeks.

But he has also experienced one of the most exciting times in his 10 years at Lego, regardless if it was all done at a safe distance from home.

"To be honest, I feel that our cooperation has never been better. Now I need to be careful about what I say, but we tend to be very social when we have a regular meeting. But when it is online, it automatically becomes more efficient. People are a bit more prepared and focused," he says.

Although Mikkel and his team have been praised by the regions for their facial visor design, certainly, it will not be a regular part of Lego production in the future.

"We only do this because it is an urgent need to help. As soon as the normal deliveries can meet the demand, we will completely stop the production and return to the production of Lego bricks," he says.