Laura Klitgaard is the new Chairman of IDA 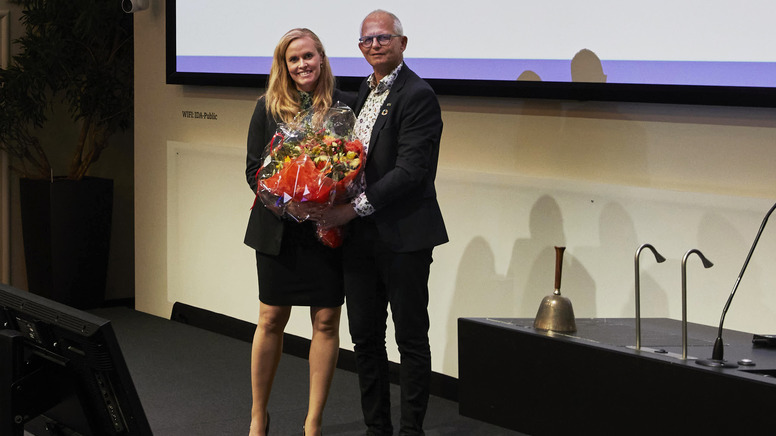 IDA's more than 140,000 members got a new chairman on Saturday 7 May, when the society's newly elected Board of Representatives unanimously elected Laura Klitgaard as chairman for the next three years.

Denmark's best trade union and largest association for highly educated professionals has a new chairman. Laura Klitgaard will spearhead IDA at a time when the society has experienced significant growth in membership and satisfaction in recent years. Laura Klitgaard received the election with applause and looked forward to the job:

"I am both proud and humbled to be elected Chairman of a society that brings together so many skills and so much knowledge. I look forward to taking IDA further together with the rest of the political leadership and all of IDA's many active members in IDA's regions, networks and with the elected representatives in the workplaces."

Laura Klitgaard has been active in IDA since she graduated from AAU as a Master of Engineering in Architecture. She then completed her education with a Master's degree in Construction Management. Laura Klitgaard has held a number of board positions in IDA, including as a member of IDA's Board of Representatives and Executive Committee for six years.

Farewell to the Chairman of the last six years

The meeting also marked the resignation of IDA Chairman Thomas Damkjær Petersen, who could not be re-elected as IDA Chairman due to the re-election rule which limits the maximum term of a Chairman to 6 years.

In his final report, Thomas Damkjær Petersen highlighted that IDA has grown by more than 40,000 members during his term as Chairman. This equates to more than 18 members every day of the year. At the same time, member loyalty and satisfaction already exceed the targets the Executive Committee had set for 2025.

Thomas Damkjær Petersen highlighted the broad cooperation in IDA as the main reason for its success: "IDA's success is conditioned by our active members. From the political leadership to our volunteers in the regions and networks, and of course the elected representatives, we create an ever better association for each other every day. I am proud of that."

The retiring Chairman also highlighted the success of the retiring political leadership in putting climate and technological solutions on the agenda, for instance through new forms of alliances.

The Board of Representatives also evaluated the recent IDA elections. The Chairman of the Election Committee, Søren Vang Fischer, gave his report and concluded:

"We ended up with a turnout of 17.4% and the highest ever number of individual votes. That's great, but of course we had hoped for a higher percentage of voting members. It has been a general challenge for the lists to get candidates for the elections, but once again we managed to mobilise many IDA members to run as candidates. It is also becoming more difficult to find the balance between making the election visible and motivating members to vote without being too pushy in our communications.

All in all, however, we can be satisfied with an election where the political lists put a lot of effort into distinguishing themselves from each other, making it easier for members to make a choice", the Election Committee chair concluded. The newly elected Executive Committee was invited to discuss how IDA's political work can become more visible between elections.

Significant changes in the accounts

The Board of Representatives also approved IDA's accounts for 2021, which showed a significant increase in income compared to the previous year. The increase in the result from 2020 to 2021 is 97.1 million DKK and is mainly due to three factors:

The result from investments in affiliated companies increased by DKK 65.1 million. In particular IDA Insurance's result has increased against the background of an extremely positive result of the claims account. The result was 146.4 in 2021 against 106.1 in 2020.

The return on financial items has increased by DKK 27.3 million.

Finally, membership growth exceeds forecasts, and income from fees is therefore above budget (DKK 317 million compared to the forecast of DKK 313 million).