Here is the winner of the Agnes & Betzy Award 2022 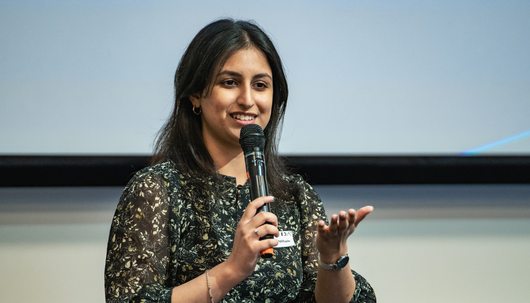 Neha Imtiaz Ullah wins this year's Agnes & Betzy Award for her work in making women visible in STEM subjects and for teaching young girls how to program.

23-year-old Neha Imtiaz Ullah, who is studying electrical engineering at DTU, has made a huge effort in recent years to raise the profile of women in STEM.

She is the founder of the platform Nordic Women in STEM where women in STEM can share their personal stories of success and failure.

She also founded the Girls STEM Club, which organises events and visits primary and secondary schools to inspire more girls to choose STEM subjects. And she has taught programming to 250 young girls aged 13-19.

She is therefore a deserving winner of the 2022 Agnes & Betzy Award, which is given to an IDA member who helps ensure high professionalism and greater diversity in STEM subjects.

Neha Imtiaz Ullah says it was on the electrical engineering course, where most students are men, that she first realised the importance of female role models.

"When I started my studies, I only had male teachers and male teaching assistants. It wasn't until my fourth semester that I had a female lecturer, Sylvia. She helped me understand that role models are really important," explains this year's Agnes & Betzy Award winner.

Meet the other nominees for the award:

Louise was nominated for the award for her efforts to support women in tech, both as a mentor in several different organisations and as a volunteer teacher alongside her job, where she has helped women who want to work in tech and taught girls digital product development.

In addition, Louise has been involved in her workplaces' internal diversity and inclusion initiatives, highlighting her female colleagues and using anonymised applications to recruit within her own team to avoid bias in the hiring process.

Christine Ipsen is nominated by two different people, both of whom highlight her as a role model in a male-dominated field because of her skills as a researcher and facilitator. Emphasis is placed on how Christine has been involved in political gender equality work at DTU in both the Gender Equality Committee and the Committee for Diversity and Gender Equality.

In addition, Christine Ipsen has helped organise Girls in Science Day for several years, and she has had names removed from assignments in her classes to avoid gender and nationality bias.