Enthusiast helps foreigners to a job 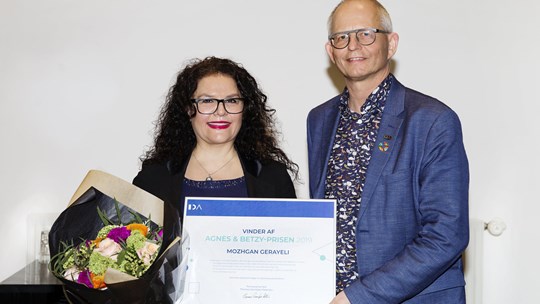 Software engineer and founder and owner of Mozhi Consulting, Mozhgan Gerayeli, is this year’s recipient of the Danish Society of Engineers Agnes and Betzy Award.

Mozhgan Gerayeli, who came to Denmark from Iran in 1986, received the Agnes and Betzy Ward 2019 from the Chairman of the Danish Society of Engineers (IDA), Thomas Damkjær Petersen. (Photo: Sif Meincke)

Finding employment in the Danish labour market can be very difficult if you do not have a Danish passport. This year's recipient of the Agnes and Betzy Award, Mozhgan Gerayeli, knows all about this. Based on her own experience, through her consultancy firm, Mozhi Consulting, she helps highly educated foreigners to a job in Denmark. Men and women with university degrees who used to work as storehouse clerks, taxi drivers or cleaners are now working in jobs reflecting their degrees, and they are using their qualifications and skills to benefit the Danish economy and themselves.

Mozhgan Gerayeli came to Denmark from Iran in 1986 at the age of 21, ready to start a new life. A few years later, she was left to face life as a single parent. Her answer was to get a software engineering degree from Odense University College of Engineering. Later, after a business career including several management positions and persistent efforts to promote gender equality and diversity in the workplace, she started her own business, Mozhi Consulting, in 2015.

At that time, she had been coaching and providing business development advice on a part-time basis for some years, but a meeting with a highly educated green card holder with Iranian background who was unable to gain foothold in the Danish labour market, changed everything for her. Or, as Mozhgan Gerayeli herself said to Ingeniøren that same year:

"When I met an Iranian green card holder, who was both capable and highly qualified but still unable to get a job, I suddenly felt that it was my destiny to help her and others like her into a job."

Mozhi Consulting has since grown and it is now a full-time job for Mozghan Gerayeli. And the results speak for themselves. So far, a many as 112 highly educated foreigners have found work with help from Mozhgan Gerayeli in a job that matches their qualifications and skills. To accomplish this requires persistence. And the nomination for the award cites exactly this: her unquenchable willingness to succeed, her industriousness and her entrepreneurial spirit.

Mozhgan Gerayeli is on a mission; a mission that fits the criteria for receiving the Agnes and Betzy Award perfectly.

About the Agnes and Betzy Award

The award was founded in 1997 in celebration of the centenary for Agnes Nielsen and Betzy Meyer, the first female engineers in Denmark.

Read more about Agnes Nielsen and Betzy Meyer (in danish)

Previous recipients of the Agnes and Betzy Award (in danish)